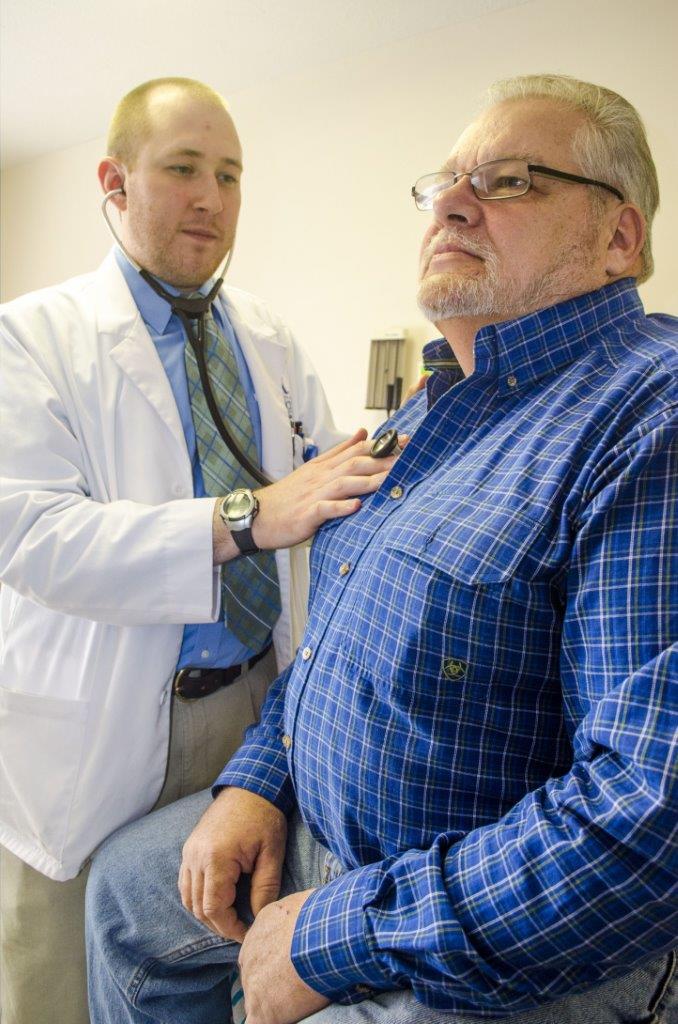 Eric Fleming provides care to a patient as a medical student in the Rural Physician Leadership Program based in Morehead. Fleming is now a medical resident in Internal Medicine at UK.

For new physicians and current medical residents Dr. Eric Fleming and Dr. Tess Smallwood, practicing medicine anywhere other than in a rural community has never been a consideration.

Recruiting more medical school students who share this sentiment and passion for rural medicine is a goal at the University of Kentucky College of Medicine with existing and newly announced programs aimed at keeping graduates in the state, particularly in underserved areas.

Physician shortages – particularly in primary care – are predicted throughout the U.S. in the coming decades and the demand for physicians in traditionally already underserved rural populations, will be in even greater demand.

The College of Medicine is at its capacity at the Lexington campus but has a deep applicant pool of qualified candidates. By developing the satellite programs, it can increase its overall class size by about 30 percent in the next few years. Currently, the College of Medicine enrolls 521 students, including 139 in the most recent admitted class  ?  the Class of 2019.

“The expansion of our Rural Physician Leadership Program is needed,” said Dr. Anthony Weaver, assistant dean of the UK program based in Morehead. “When you look at Kentucky’s demographics, we have a lot of older physicians who will likely retire in the next few years so that coupled with the expansion of Medicaid, will continue to increase demand for doctors, particularly in rural areas.”

The RPLP program which began in 2008 has 10 students in each class with a total of 40, Weaver said.  However, once the expanded program begins in the next couple of years, the class size will likely double to 20 students per class and perhaps eventually grow even larger in size, depending on the available clinical resources needed for training of the medical students.

“I see this as a way to attract a different kind of student who really is wedded to rural life and wants to live in that environment and make a difference in a small community,” he said. “It will be great for our students to not have to make that move midway through their medical school years and it will be great for the community of Morehead to have more of their presence here.”

Smallwood, originally from Berea, graduated from the UK College of Medicine’s RPLP in Morehead in 2014 and is now completing her second year of a four-year residency program in OB/GYN at UK in Lexington. Back when she was looking for a medical school to attend, she knew she wanted to work in rural medicine and was looking for a program where it was offered as part of the curriculum. She was quickly drawn to the UK program offered in Morehead.

“As the first person in my family to go to medical school I can’t say that I had a lot of expectations, but the RPLP program went above and beyond anything I could have imagined,” she said.  “It was an incredible experience to be so involved in patient care early on as a student and to build relationships with the physicians and the patients.”

Fleming also graduated from the RPLP program in 2014 and says he found the contact and connections made with patients a rewarding experience.

“One example of my experience in medical school is that I saw the same patient on rotation in general medicine, then later in urology, surgery and cardiology,” he said. “I got to know not only the patient, but his family who invited me to their home for a fish fry. The bonds you make and the relationships you have in a smaller community are a big deal.”

Growing up in a rural area in western Kentucky in Ballard County, he knew he would want to return to a similar type of community after becoming a physician.  He is now back at the UK campus in Lexington in the internal medicine residency program. But when he completes his training in June 2018, he plans to move back to Western Kentucky.

There Fleming wants to work as a hospitalist and to set up a transition care clinic, a specialized treatment clinic designed to prevent readmissions after a hospital discharge or return visits to the Emergency Department and serve as a bridge from an inpatient hospital stay until the patient is stabilized at home.

“The RPLP program initially was created in response to the growing health care needs evident in rural areas and as these needs continue to increase,” Weaver said. “By providing more medical students from Kentucky and elsewhere the opportunity to receive their training in such a unique small town setting – in both the Eastern and Western parts of the state — will hopefully be greatly beneficial to both the medical students and the patients who will one day depend on them.”

-Kristi Lopez is with the University of Kentucky.