During the last 20 years, research has shown that there is a direct correlation between childhood trauma and adult illness. This childhood trauma, called Adverse Childhood Experiences (ACEs), can cause academic and behavioral problems. It can also lead to an increased risk for heart disease, depression, cancer, diabetes, obesity and more, if left untreated. 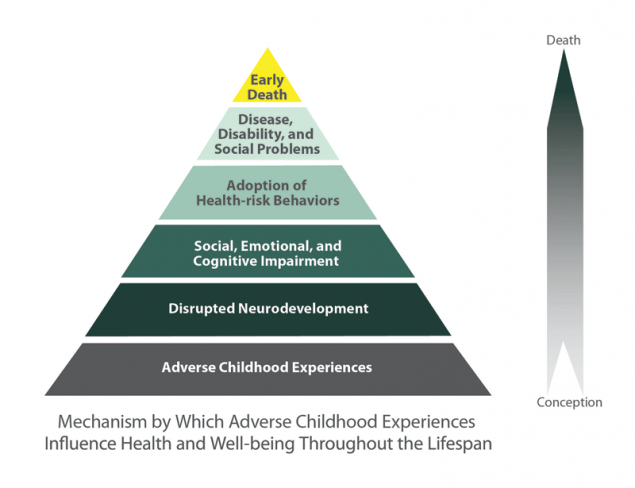 ACEs are very common. According to the CDC-Kaiser Permanente Adverse Childhood Experiences (ACE) Study, of the 17,000 ACE study participants, 64 percent have at least one childhood ACE.

Kentucky started surveying for ACEs on its 2015 Kentucky Behavioral Risk Factor Surveillance (KyBRFS), a telephone health survey co-sponsored by the CDC and the Kentucky Department for Public Health.

Of those Kentuckians experiencing at least one ACE:

Among those Kentuckians experiencing five or more ACEs compared to those with no ACEs, they are:

In Kentucky, a review of data from the National Survey of Children’s Health, demonstrates a significantly higher frequency of ACEs for children living at or below the federal poverty level, a rate that decreases dramatically as income rises.

If programs are developed and implemented to protect and nurture children, these prevalent health problems can be significantly reduced. Science shows the effects of ACEs are not permanent and identifying and treating children with high ACE scores early on is important.

This work, funded by a grant from the Foundation for a Healthy Kentucky in 2012, is expected to evolve into a state model for addressing ACEs.

Currently there are five BOUNCE schools within the JCPS district. BOUNCE is closely tracking student, staff and parent outcomes, which to date have shown considerable progress.

Louisville’s BOUNCE Coalition will serve as the lead agency to take the next steps to continue the community dialogue, convene stakeholders and provide training so that Louisville is more effective in preventing, identifying, and responding to ACEs.

BOUNCE is promoting a shift the perspective by bringing a trauma informed system into the schools. This perspective encourages the question, “What happened to this student?” instead of “What is wrong with this student?”

BOUNCE hopes to improve the future health of children, fostering the skills to bounce back from adversity with resiliency and grit.

Why is resiliency important? Resiliency is the ability to thrive, adapt, and cope despite tough and stressful times. Resilience is a natural counter-weight to ACEs. The more resilient children are, the more likely they are to deal with negative situations in a healthy way that won’t have prolonged and unfavorable outcomes.

This success within the school system has built the framework for the BOUNCE Coalition’s next phase: serving as the catalyst for fostering trauma informed systems and organizations across the Commonwealth, specifically into medical schools and in the healthcare setting.

Data suggest that ACEs should be addressed during routine healthcare visits, and many individuals and organizations are beginning to implement trauma-informed, resilience-building practices.

However, for many physicians, addressing exposure to traumatic events with their patients is seen as difficult for a number of reasons, including lack of time, complexity of the topics, limited referral resources and discomfort.

It’s understandable, considering how health centers struggle to address every need of the patient in a short window of time. Why would a health center ask a patient for more, seemingly non-health related information?

Bouncing back in healthcare

Norton University, an internal educational program at Norton Healthcare, recently trained key members of its education team in the BOUNCE curriculum for implementation in the healthcare system.

According to Mary Jo Bean, senior vice president of planning and business analysis, Norton Healthcare is aware of the impact of social determinants on the health of those that they serve, both in the pediatric, as well as the adult population.

Further, Bean explained, Kentucky is a state that has a shortage of behavioral health providers and social workers. Given those variables, Norton felt it would be valuable to increase education around ACEs, focusing on how to react, respond and provide resources to build resiliency skills for patients and caregivers.

The Norton University leadership team attended a pilot program, called Bouncing Back, conducted by the BOUNCE Coalition to establish a baseline program and develop modifications to meet the healthcare environment. There are plans to make it available to internal Norton staff and external parties in the community, region and state.

There are concerns that investing in children and families with high ACE scores is difficult because of reimbursement policies. Bean explained that high ACE scores tend to indicate high risk for chronic conditions so this is information helps the healthcare provider work with the family to identify chronic conditions at an earlier stage and make care plan recommendations to help them prevent the onset or manage those conditions more effectively.

Currently the reimbursement system for healthcare offers limited reimbursement for integrated services. However, Norton currently has Licensed Clinical Social Workers in a number of their practices to clinically assist patients and help them get connected to resources in the community. 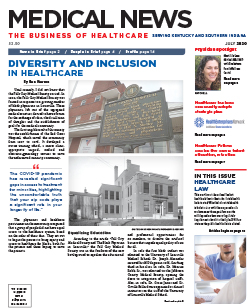