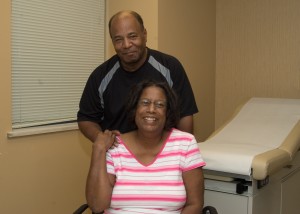 The Transplant Center at Jewish Hospital, part of KentuckyOne Health, helped make medical history on April 19, 2012 as part of the first international paired kidney donor exchange in America, with the help of the Alliance for Paired Donation.

Paired kidney donation takes place when a donor who is incompatible with their designated recipient promises to donate their kidney to a stranger in order to enable their designee to receive a compatible kidney from another stranger.

JoAnn Breckenridge of Elizabethtown, Ky. received a kidney transplant in Louisville at Jewish Hospital on April 19, 2012 as a result of the paired donation.  Her husband, William, donated a kidney on May 1, 2012 to help another individual and continue the chain.

The first international paired donation came as a result of the tireless efforts of Theodora (Dora) Papaioannou-Helmis, a Greek woman who worked to save her husband’s life by waging a relentless battle to change Greece’s transplant law—a law that stated that only a first or second degree relative could legally donate a kidney to a recipient in Greece. The law was instituted in order to prevent a black market organ harvesting /selling system. Unfortunately, an unintended consequence of the law was that it made paired kidney donation impossible, as this requires strangers to “swap” kidneys.

The chain began when a 31-year-old Oklahoma woman, Elizabeth Gay, altruistically donated her kidney to a stranger—Dora’s husband, Michalis.  In return, Dora donated one of her kidneys to another person in Wilkes-Barre, Pa., completing the first intercontinental exchange and opening a door that potentially can save thousands of American lives, as well as others throughout the world.  A kidney from the donor in Wilkes-Barre, Pa. was flown to Jewish Hospital for JoAnn Breckinridge, and thus the chain continues.

“We were honored to be part of the first international paired kidney donation,” said Marvin.  “It only takes one caring individual to start the chain that can save so many lives.  We are grateful to the generosity of each donor that was part of this paired donation.”

The successful transplants were also completed at: The University of Toledo Medical Center, in Toledo, OH; Geisinger Wyoming Valley Medical Center in Wilkes-Barre, PA; and Scripps Green Hospital in La Jolla, CA. Three more transplants in the chain will take place shortly at Piedmont Hospital in Atlanta and the University of Colorado Hospital in Denver. To date, one Greek and four American lives have been saved and three more transplants are expected within weeks as a result of the first intercontinental kidney donor chain.

Though paired exchanges have been taking place in the United States for over 10 years, the idea of enlarging the donor pool by including other nations, thereby getting more Americans transplanted, has been problematic due to the variability in national transplant laws. As a result of Dora’s efforts and the keen insight of the Greek government to adopt new health laws regarding organ transplantation, kidney paired transplantation became legal in Greece. In essence, this allowed the Greek national health insurance system to pay for kidney transplants emanating from a paired exchange system within and outside of the country.