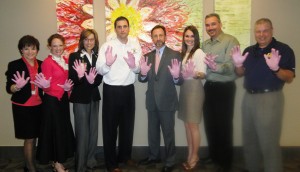 “Western Baptist is a regional medical referral center, and Murray State University is our regional university,” said Dona Rains, director of marketing and planning at Western Baptist, “so this is the perfect partnership to remind women in our region that early detection of breast cancer saves lives.”

Catherine Sivills, assistant vice president for communications at Murray State, said it is important for college students to develop good lifelong health habits, such as yearly exams, and to share the message with their families.

Murray State has many ties with Western Baptist through staff and students, including nursing students, and its Paducah campus. Sivills also noted the university’s emphasis on regional outreach – on projects that affect not only the classroom, but also residents in the area.

“We consider one of our missions to be a source of support and partnership to the region in all areas of education, including health education,” Sivills said. “By offering our digital media expertise, we can contribute to the project on more than one level. Many faculty, staff and alumni are breast cancer survivors, so this will resonate with many groups associated with our university.”

One in eight women will develop breast cancer, making it the leading cause of cancer death among women. The awareness video will be distributed during October – Breast Cancer Awareness Month – in a social media campaign, reminding women to get annual mammograms for early detection.

The original Pink Glove Dance video – sponsored by pink glove manufacturer Medline Industries Inc. – premiered in 2009, featuring a Portland, Ore., hospital, with 13 million views on YouTube. The next year, 17 facilities participated in videos. Last year, Western Baptist was one of 135 participants. Its first entry in the national contest has been viewed more than 32,000 times, with 17,400 votes, and spurred other videos at WPSD-TV and The Paducah Sun.

Rains said Western Baptist was overwhelmed with the response. More than 225 hospital employees, representing all departments, danced. “Whether it was the housekeeper or the CEO, when they put on those pink gloves, they turned into video stars,” she said, “and we were moved most by our breast cancer survivors who danced with the greatest enthusiasm.”