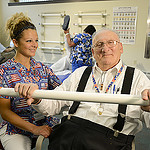 Just as the notion of what’s considered ‘old’ has changed in today’s society … think ‘70 is the new 50’ … so too has the role and function of skilled nursing facilities.

Coggin said the notion of a ‘nursing home’ as the last stop for seniors before they die is simply outdated. A little ironically, the industry has moved from being a residential model that looked like an old-fashioned, antiseptic medical facility … to a medical model that often looks like a well-appointed residence.

As the model has changed, one of the most striking differences is in length of stay. Coggin noted that less than a decade ago, NHC’s average length of stay was 210 days. Today, the median length of stay is 26 days. In a number of facilities, such as NHC Farragut in Knoxville, Tenn., that time frame is even shorter.

“We’re serving more patients than we’ve ever served, but the length of stay is much shorter than it’s ever been,” said Coggin. “Farragut is one of those facilities that is on the cusp of a new generation of long-term care. It’s all because of the emphasis on rehabilitation.”

There are a number of reasons behind this change, but Coggin said cost and reimbursement … along with a culture shift … are among the primary drivers. The Omnibus Budget Reconciliation Act of 1987 signed into law by President Ronald Reagan fundamentally changed the way nursing homes operated … and simultaneously transformed society’s expectations of them. For long-term care facilities to receive Medicare and Medicaid funding in the post-OBRA world, they must provide services so that each resident might “attain and maintain her highest practicable physical, mental and psycho-social well-being.”

“The emphasis was on making sure the right patient was at the right place. As a result, a new housing phenomena … assisted living … grew out of that,” Coggin explained.

That ‘right patient, right place’ idea endured and changed the concept of how a skilled nursing facility could align with hospitals in an evolving post-acute care role. “So much has been driven by reimbursement,” Coggin noted. He added hospitals could only keep patients, who were progressing as expected, for so long before Medicare would stop paying the inpatient rates associated with the higher acuity level of care. Yet, Coggin continued, these patients weren’t ready to go home, either.

“That’s when we saw a shift in our patients … from a few Medicare patients who needed rehab to a lot of patients needing rehab,” he said. A tiered-down system was born from these hospital reimbursement constraints.

At the same time, a cultural shift was happening. Longer lifespans and medical technology improvements meant more seniors could expect to live active lifestyles far beyond retirement age … and the senior segment of the population also began to increase dramatically. According to the Social Security Administration, there were approximately 9 million Americans age 65 and over in the year 1940. By 2000, that number had jumped to almost 35 million. By 2010, that number had grown yet again to just over 40 million.

Increasingly, Coggin said, skilled nursing facilities “are the recovery centers where you go to rehab.” He added with a chuckle, “It’s not unusual at all to have patients come to us for services and then get a note a month later saying, ‘Thanks for the rehab. I just finished a round of golf.”

He continued, “I’ve been in this business for 41 years, and we have clearly switched over in the last 15-20 years from a residential model to a patient care model … and it’s ramped up even greater over the last 3-5 years.”

Once again, he pointed to cost and reimbursement as drivers of the most recent jump in the rehab population. Not only do many SNFs like NHC provide a full range of occupational, speech and physical therapy services at a lower daily rate than hospitals, these post-acute facilities can also help hospitals avoid the monetary penalties associated with avoidable readmissions.

Similarly, just as NHC accepts patients downstream from hospitals, the rehab facilities also look to move patients to a more appropriate care setting once therapists have maximized their time with a patient … whether that is to assisted living or hospice or a return home. In fact, Coggin said, about 80 percent of NHC’s patients ultimately are discharged home.

“It’s clearly a focus on transitions of care to make sure the patient receives the appropriate level of care for the appropriate amount of time and avoids unnecessary readmissions,” Coggin concluded of the new role SNFs play in the care continuum.