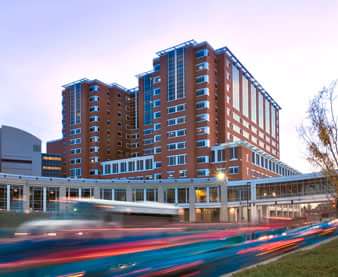 Dr. Mark Evers, director of the University of Kentucky Markey Cancer Center, gave his annual “State of the Cancer Center” address today at Markey Research Day, highlighting the center’s major accomplishments in patient care, recruitment, research and outreach from the past year.
“Markey is making great strides in both clinical care and research, and we plan to continue that trend moving forward,” Evers said. “Kentucky is still ranked first in the nation for both cancer incidence and mortality. As the only National Cancer Institute-designated cancer center in the Commonwealth, it’s our job to keep pushing further to offer the best possible cancer care to the people who need it most – Kentuckians.”
Patient Care at Markey
Patient growth continued to increase in the past year, with more than 29,000 unique patients coming for diagnosis and treatment, an estimated 20 percent increase in unique patients over 2014. Over the past 10 years, Markey has more than doubled the number of unique patients seen.
Renowned neuroendocrine expert Dr. Edward Wolin came on board last year, joining Dr. Lowell Anthony for Markey’s Neuroendocrine Tumor Program and establishing Markey as an international destination site for the treatment of rare neuroendocrine and carcinoid tumors. Markey now has six neuroendocrine clinical trials currently accepting patients with two new trials to open up later this year.
In addition to Wolin, other new clinical recruits at Markey include:
·         Dr. Gerhardt Hildebrandt, chief of the division of Hematology and Blood and Marrow Transplantation
·         Dr. Syed Haider, specializing in malignant hematology and stem cell transplantation
·         Dr. Aju Mathew, specializing in breast oncology and epidemiology
·         Dr. Gaurav Goel, specializing in gastrointestinal and colorectal oncology
·         Dr. Sean Dineen, specializing in breast cancer surgery
Cancer Research
Recruiting strong researchers is a major aspect of earning and maintaining an NCI designation. Three new recruits in basic research and population science joined Markey’s vast research team in 2014:
·         Janie Heath, dean of the UK College of Nursing; specialzing in the development and testing of new interventions to improve tobacco cessation outcomes
·         Jessica Burris, assistant professor in the UK Department of Psychology, specializing in cancer survivorship and smoking health behavior changes
·         Amanda Fallin, assistant research professor in the UK College of Nursing; specializing in tobacco control policy and tobacco use among vulnerable populations
Despite tough economic times, cancer funding increased, with Markey bringing in more than $38.7 million in funds from the National Cancer Institute, National Institutes of Health, and other peer-reviewed and non-peer reviewed sources — a $9.8 million increase in research funding over 2014. Markey faculty published 157 research findings in 2015, with 23 of those published in high-impact scientific journals such as Nature, Cancer Cell, and more.
In November, UK along with the University of Louisville and the Lung Cancer Alliance announced the Kentucky LEADS (Lung Cancer. Education. Awareness. Detection. Survivorship.) Collaborative, a project that will focus on reducing the burden of lung cancer in Kentucky. This project is the first of its kind, bringing together an interdisciplinary team of community partners and lung cancer prevention and control experts to assess novel approaches for identifying lung cancer earlier to improve survival. The project will also develop and evaluate interventions to improve quality of life and survivorship for individuals with lung cancer and their caregivers. These efforts are supported through a $7 million grant from the Bristol-Myers Squibb Foundation’s Bridging Cancer Care initiative.
2015 also saw the official launch of the Markey Cancer Center Research Network (MCCRN), a new initiative conducting high priority cancer research through a network of collaborative centers with expertise in the delivery of cancer care and conduct of research studies. Medical centers participating in the MCCRN will have the opportunity to either conduct appropriate clinical trials for their population on-site or have a quick line of referral to Markey for trial participation.
Currently, the MCCRN has three sites on board, with several more to join over the next year:
·         King’s Daughters Medical Center, Ashland
·         St. Claire Regional Medical Center, Morehead
·         St. Mary’s Regional Cancer Center, Huntington, W.Va
Markey’s Reach Across the State
Though based in Lexington, Markey also strives to provide access to top-notch cancer care across the state and beyond through the Markey Cancer Center Affiliate Network (MCCAN). The MCCAN is a group of healthcare facilities that provide high-quality cancer services and programs in their communities with the support and guidance of the UK Markey Cancer Center, allowing patients to receive their care closer to home.
Currently, the MCCAN comprises 13 hospitals across the state of Kentucky:
Additionally, evaluations are under way for several other hospitals, further establishing Markey as the destination cancer center for the region.
The Future of Cancer Care in Kentucky
The faculty and staff at Markey have a busy few years ahead of them, as the cancer center prepares to submit its application for an NCI designation as a comprehensive cancer center in 2017. Currently, 48 of the 68 total NCI-designated cancer centers in the country hold a comprehensive cancer center status.
To earn this top level of designation, cancer centers must show a depth and breadth of research in each of three major areas: laboratory, clinical, and population-based research, as well as substantial transdisciplinary research that bridges these scientific areas. Additionally, outreach is especially important, and comprehensive cancer centers must demonstrate professional and public education and outreach capabilities, including the dissemination of clinical and public health advances in the communities it serves.
“As the only NCI-designated cancer center in Kentucky, it’s our responsibility to be the leader in cancer care and to always seek out new ways to improve rates of cancer incidence and death in the state, and to make sure that we can also offer the best possible care for our patients right here in Kentucky,” Evers said. “Earning a comprehensive cancer center designation from the NCI will be another big step in that direction.”
–Allison Perry, University of Kentucky Markey Cancer Center
Sharing
Authors