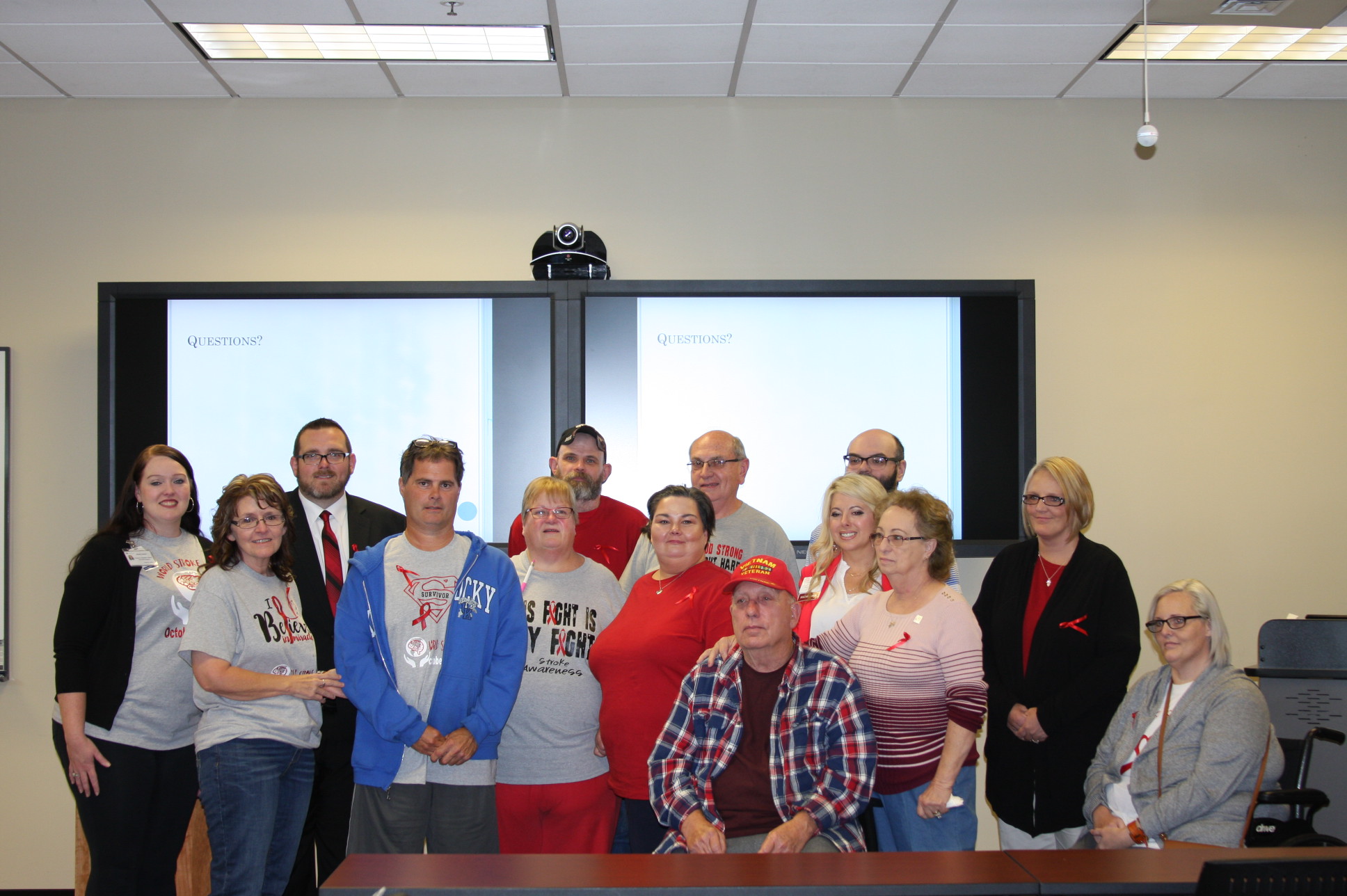 By Beth Bowling and Hillary Smith

The Hazard and Surrounding Area Stroke Survivor and Caregiver Support Group through the University of Ken­tucky Center of Excellence in Rural Health, along with one of the group’s founding members, Mark Kincaid, a stroke survivor from Letcher County, were honored with Stroke Hero Awards from the American Stroke Association, a division of the American Heart Association (AHA).

Stroke Hero Awards are given each year to individuals and groups in the stroke community who have shown resil­ience and outstanding progress. Kincaid was among eight finalists nationwide for the Voters’ Choice Award, which honors an individual or group making an out­standing effort to educate, inspire, and bring awareness about stroke on a local or national level. AHA honored him with the Voters’ Choice Award and the following story on their web site:

Over a decade ago, Mark Kincaid experienced a catastrophic ischemic stroke at age 42 due to undiagnosed high blood pressure. He miraculously survived and after intensive therapy improved enough to go home after three months.

Kincaid joined his local stroke support group and has been an active member for years. He regularly participates in stroke education activities in schools, helps provide stroke awareness education at local events and works with a rehabilitation center to help patients learn to cope with the aftermath of a stroke. Mark also helps educate graduate students at Eastern Kentucky University on the stroke survivor experience and works to achieve local and national recognition for Stroke Awareness Month and World Stroke Day.

The Hazard and Surrounding Area Stroke Survivor and Caregiver Support Group was also honored by the AHA with the Outstanding Support Group Award. Established in 2015, it was the first stroke support group ever created to serve Perry and surrounding counties. It formed after a need was identified during a UK pilot, Kentucky Care Coordination for Community Transitions Program (KC3T), a program geared toward stroke navigation and community transition.

The group offers support not only for stroke survivors but also for their caregivers and family members. Increasing awareness and providing stroke education at the community level is an additional mission of the group. They actively work to raise stroke awareness in under-resourced rural eastern Kentucky — a region with one of the highest stroke rates in the nation.

Since 2018, they have completed over 542 stroke screenings, educated 1007 elementary and high school stu­dents and garnered stroke proclamations in three counties as well as two cities of eastern Kentucky.

“When we developed the Kentucky Care Coordination for Care Transitions program little did we know that one of the lasting impacts within the region would be the development of this amazing support group. This group was a key member of another funded project examining how to empower community members to be active advocates within their community. This national recognition demonstrates how the stroke support group has excelled as advocates for the stroke population within their rural communities,” said Pat Kitzman, professor in the UK Physical Therapy Program.

Keisha Hudson, research coordinator at the UK Center of Excellence in Rural Health (UK CERH) located in Hazard, Kentucky has provided dedicated leadership for the group since its inception and said the award could not have come at a better time since the organization will celebrate its five-year anniversary this month.

“Our group has worked very hard to make stroke education and awareness a focal point in our rural communities of eastern Kentucky, and I am honored that our efforts have been recognized by the American Stroke Association,” Hudson said.

Dr. Fran Feltner, director of the UK CERH, applauded the passion and dedication of the people working on the locally-led initiative to improve the health of their fellow rural Kentuckians.

“The support group has developed into a family of people who are survivors, caregivers, family members, local and state leadership, who play a vital role in educating community awareness and support for the people who need access to care and healing,” Feltner said.

-Beth Bowling and Hillary Smith are with the UK Center of Excellence in Rural Health (UK CERH) in Hazard, Kentucky.