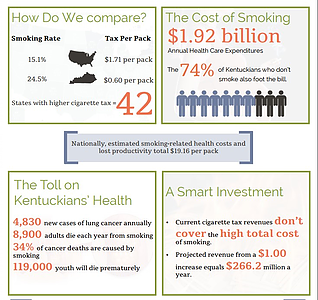 Kentucky spends $1.92 billion every year on healthcare costs related to smoking, according to a new infographic released by the Coalition for a Smoke-Free Tomorrow. The infographic makes the case for raising the state’s current tax on cigarettes by at least $1 per pack, which would raise $266.2 million a year in revenue that the Commonwealth could use for healthcare, pensions or other needs.

Nationwide, the cost of smoking-related health-care expenditures and lost productivity total $19.16 per pack of cigarettes. Kentucky’s current cigarette tax of 60 cents per pack ranks 43rd in the country, significantly below the national average of $1.71.

But the costs of smoking are measured not just in dollars, said Ben Chandler, Coalition chair. “Nearly 9,000 deaths every year in Kentucky are directly related to smoking, more than alcohol, AIDS, car crashes, illegal drugs, murders, and suicides combined,” Chandler said. “If we don’t start reducing smoking rates in Kentucky right now, 119,000 of today’s youth will die early due to tobacco use.”

Smoking also causes 34 percent of all cancer cases in Kentucky, which has both the highest incidence of cancer and the highest number of cancer deaths in the country. According to the infographic, 4,830 new cases of lung cancer tied to smoking are diagnosed every year in the Commonwealth.

“The current tax doesn’t begin to cover the high cost of smoking in Kentucky,” said Emily Beauregard, executive director of Kentucky Voices for Health. “An extra dollar per pack will put a dent in those costs. More to the point of the Coalition’s work, it also will save lives and improve health.”

In fact, 5,900 Kentucky babies would be born healthier over a five-year period because their moms would quit smoking if the state enacted a $1 tax increase. The Campaign for Tobacco-Free Kids estimates that a total of 29,400 adults would quit smoking, and 23,200 kids would never start.

Research shows that a tobacco tax increase in Kentucky must be at least $1 to achieve any health benefits.

The Coalition for a Smoke-Free Tomorrow is advocating for parallel tax increases on other tobacco products sold in Kentucky, including smokeless tobacco and e-cigarettes, to help ensure vulnerable populations don’t switch to these products.

–Coalition for a Smoke-Free Tomorrow