As many as one-third of Kentucky’s rural hospitals are in poor financial shape, and the survival of some will likely depend on their willingness to adopt new business models, state Auditor Adam Edelen said Monday.

Unveiling a nine-month study, Edelen said 15 of the 44 hospitals examined were in “poor financial health,” and warned, “Closure may be an unfortunate reality for some.”

The study did not include 22 of the 66 Kentucky hospitals that are located outside metropolitan areas, which declined to participate or didn’t provide the type of information requested. Edelen said those hospitals are mainly privately owned. If they had been included, Kentucky Hospital Association CEO Michael Rust said, the financial picture “would be better, but I don’t think they would be substantially different.”

Gov. Steve Beshear said the report was “a dated snapshot” because its most recent data was from 2013, before federal health reform was fully implemented. “Conditions are no longer the same,” Beshear said in a news release. “Hospitals received more than $506 million in 2014 through new Medicaid expansion payments, while seeing significant reductions in uncompensated care costs.  Those are huge changes to hospitals’ bottom lines that are not shown here.”

Edelen, who was Beshear’s first chief of staff, said the full effect of federal health reform isn’t certain. His report noted that Kentucky hospitals have had higher-than-average penalties from Medicare for readmitting patients within 30 days, a newly implemented feature of the law. Forty of the 63 hospitals penalized were rural, andnine of the 39 in the U.S. that got the maximum penalty were in Kentucky.

“This report doesn’t speak to causation” by the reform law or the state’s relatively new managed-care system for Medicaid, Edelen said, it is “not a rebuke” of either, but provides “a baseline for monitoring” by policymakers at the state and local levels.

The report says that to survive, rural hospitals must adapt to new business models, such as merging with larger hospitals or hiring them as managers, forming coalitions with other rural hospitals, or finding a health-care niche that hasn’t been served.

Adaptations might be a hard pill to swallow for many rural hospitals because they call for yet more change in the rapidly changing health-care landscape of electronic health records, managed care, Medicaid expansion and full implementation of the Patient Protection and Affordable Care Act.

Edelen said adaptation is important for rural communities, for whom “the importance of rural hospitals cannot be understated. They provide health care to 45 percent of Kentuckians and in every community they serve they act as one of the larger employers, paying a significantly higher wage than the average the community experiences.”

He also cited the many small hospitals that have formed relationships with larger networks to relieve the increased administrative burden associated with the three-year-old managed-care system. The report says half the hospitals studied have reported an increase in hours spent on administration.

The report suggested that the state Cabinet for Health and Family Servicesnegotiate better contracts with managed-care organizations, partly to streamline MCO rules and paperwork to reduce the administrative burden. “We are optimistic that the current work of the cabinet to improve those contracts is going to bear real fruit,” Edelen said.

The new contracts will start July 1. In an interview, cabinet Secretary Audrey Haynes sounded optimistic about them but said she couldn’t give details.

Haynes has been saying since she became secretary three years ago that many hospitals must change the way they do business. She said in an interview that the readmission penalties have forced hospitals to change by providing better discharge planning, and utilizing outpatient services like home health, nursing homes and rehabilitation.

One Kentucky hospital, in Nicholas County, has closed in the last year. Haynes said the cabinet is working with Fulton County, whose hospital is scheduled to close March 31, to explore how to continue providing care at the facility, such as an emergency room or an ambulatory surgical center.

Haynes recommended in the interview that all nonprofit hospitals put audited financial records and their tax returns on their websites and adhere to open-meeting laws.

In a lengthy response, included in the report, Haynes rejected Edelen’s suggestion that her cabinet regularly monitor the fiscal strength of rural hospitals. She said in the interview that would pose a conflict of interest, since the cabinet regulates the hospitals.

Edelen’s analysis of hospitals’ financial health was based on percentage of revenue kept as profit, number of days of cash on hand, debt financing and depreciation. It found that the financial condition of 68 percent of Kentucky’s rural hospitals scored below the national average.

Here are the rankings (click on the image for a slightly larger version): 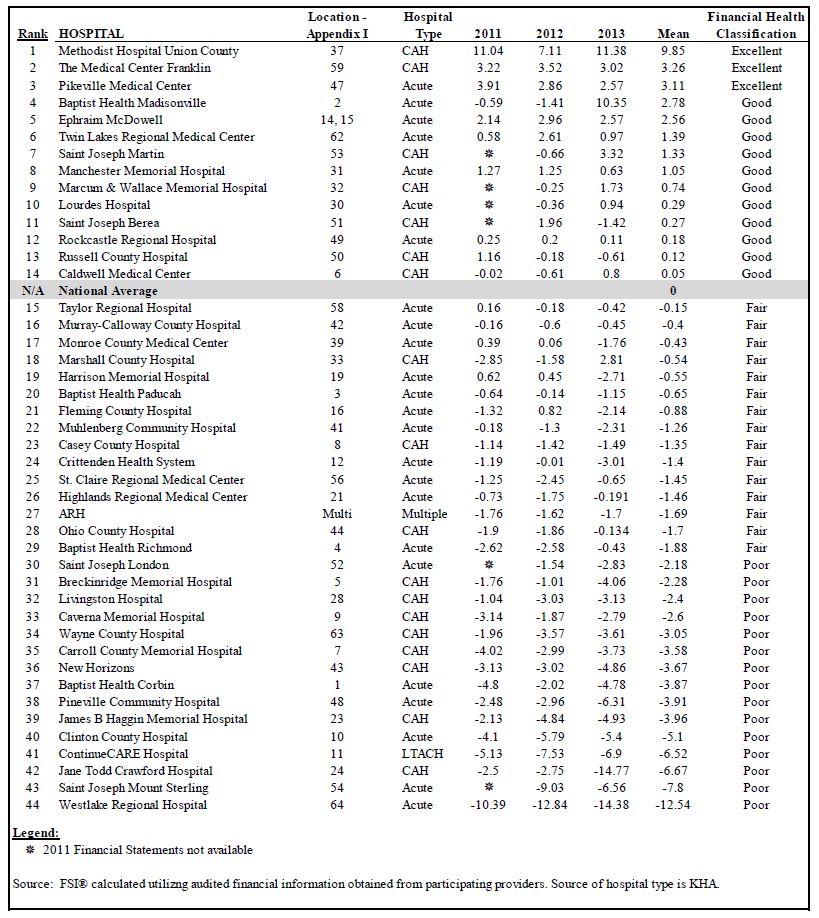