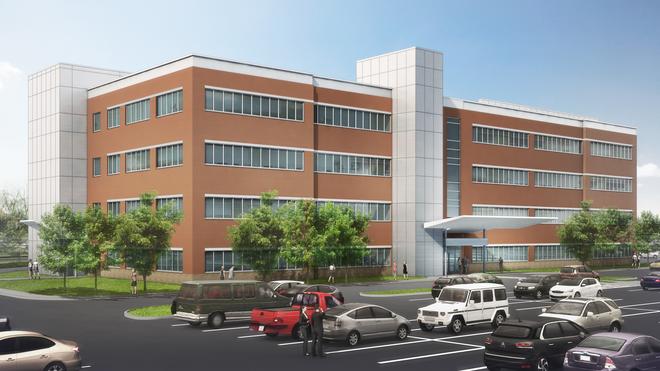 A lot is going on around our state in healthcare architecture and design. We look at some of the major renovations, expansions and new constructions since our May 2016 issue.

Things are moving along for the expansion and major renovation of Norton Audubon Hospital, which started in May of 2016.

The design of the $107 million dollar, multi-year hospital growth plan focuses on enhanced patient privacy, patient satisfaction, efficiency and clinical value. The project is on budget and on the timeline. The foundational work is complete and thanks to a mild winter, it is on schedule.

Laughlin Millea Hillman (a 2014 MediStar Award winner for the design of Norton Women’s and Kosair Children’s Hospital) is the architect for the expansion project and Messer Construction Co. is the construction manager. The project will take about three and a half years to complete.

The $55 million Health Professions Education Building, a 103,000 square-foot facility housing the college of optometry at the University of Pikeville opened in February. This program provides technology and clinical training that will enhance the learning experience for the school of nursing and other health professions programs. Construction began in the spring of 2015.

The optometry school was funded through a $40 million federal loan for the building and a $7.4 million federal grant to the university to purchase equipment, instructional supplies and other materials.

The Kentucky College of Optometry at the University of Pikeville is the first and only optometry school in the commonwealth. With an inaugural class of 65 students for the 2016-2017 academic year, the newest college at UPike is one of 22 optometry schools in the nation, and the only one in several surrounding states.

Architects from Trivers Associates in St. Louis, Missouri worked on this project.

The $3 million project also has 16 exam rooms and four consult rooms. The center is named for Steve Trager, chairman and CEO of Republic Bancorp Inc., and his family, who gave about $2.2 million.

The construction manager is Danis Construction, which has an office in Sycamore Township. NK Architects of New Jersey is handling the design.

Masonic Homes of Kentucky broke ground on a new $44 million independent living community called The Meadow in late 2016 and framing and foundation placement are being completed.

Baptist Health Richmond celebrated the completion of a $20 million, phased renovation to modernize the facility in late 2016. The project involved an extensive renovation to the exteriors of all the buildings on campus as well as interior renovations throughout the hospital and medical office buildings.

Site work modifications to the campus — including a traffic circle, updated traffic configurations and a new parking lot — assisted in better organizing vehicular traffic. To create a more cohesive campus aesthetic, the main hospital and medical office building exteriors were stained and newly designed entrances and drive-under canopies were installed.

This 15,000 sq. feet addition and renovation was completed by TEG Architects of Jeffersonville, Indiana.

A new, four-story medical office building now under construction will add even more amenities to the shopping and services hub at Old Brownsboro Crossing in Louisville, Ky. The McMahan Group, along with lead contractor Messer Construction Co., recently broke ground on the 100,000 square foot, four-story facility – the third medical office building at the development.

TEG Architects, CMTA Engineers and BTM Engineering were hired to design the structure.

HGA Architects (MediStar Award winner for design in 2015 for Owensboro Health Regional Hospital) and engineers with Smith Hager Bajo in Scottsdale, Arizona worked on this project.

The F.W. Owens Company and architect Ed Eiche, both based in Louisville, Kentucky, worked on this project.

In the late 1980’s, Imran Kahn launched fundraising efforts to commission and build cancer hospitals to serve his fellow Pakistan citizens. In 1994, the construction of the original facility in Lahore was completed under the guidance of Naushewan Burki, MD, who was a member of the medical staff at the University of Kentucky.

Since then, SKMCHRC has served over 250,000 patients annually with 75 percent of those patients receiving financial assistance. In 2012, the IKCA launched the design of the second facility to be constructed in Peshawar. Phase 1 supporting outpatient care opened in 2014. Phase 2 supporting inpatient care and research is nearly complete and is expected to open in late 2017.

IKCA recently launched design of the third facility to be constructed in Karachi. Schematic design is in process with site-related construction expected to start in late 2017. AJRC is also currently working on design for a large addition to the original Lahore facility.

Combined, the three cancer research and treatment hospitals located in the populated regions of Lahore, Peshawar and Karachi will provide cancer care to nearly 1,000,000 patients each year.

AJRP’s role is that of design architect charged with programming and providing design development documents to the Architects of Record for each of the three new facilities. All the hospitals are designed to USA standards to serve the environment of care, health and life safely. The architectural solutions incorporate Neo-Islamic design reflective of the rich cultural heritage that prevails.

Building science varies from the practices that architects and engineers subscribe to throughout this region. Materials are limited and construction equipment can be difficult to mobilize especially in remote Peshawar. For example, exterior building materials were limited to concrete and masonry as modern wall systems are far too expensive to deliver given limited access.

AJRC were the architects for many local healthcare projects, such as the Cardiovascular Innovation Institute, which won a MediStar Award for design in 2013, the Health Frazier Rehab Center as well as Park Tower at Baptist East.

Progress is being made on the new, 17,000-square-foot pediatric medical office building. The building will house all of the UofL Physicians pediatric specialty clinical practices, with a large general pediatrics location on the ground floor. In March, fifth floor concrete was completed and work began to form the sixth floor. Plumbing and electrical work is continually being installed. Wall and framing is also beginning for lower floors.

The practice is scheduled to open in 2018. Architectural firms GBBN, Stanley, Beaman & Sears and Messer Construction Co. are in charge.

Sts. Mary & Elizabeth Hospital, part of KentuckyOne Health, has completed a $9 million renovation and expansion of the hospital’s emergency department. The changes more than double the size of the emergency department, bring new technology to patients’ bedsides and improve the overall workflow of the department, which will help reduce patient wait times.

Stengel Hill Architecture was selected as the design partner for the project and Whittenburg Construction served as general contractor.