After a decade of decline, suicide is becoming more common in the United States, increasing by 24 percent from 1999 through 2014, according to the federal Centers for Disease Control and Prevention.

The CDC report looked at cause-of-death data between 1999 and 2014 and found that suicide rates increased for both males and females in all age groups from 10 to 74.

And while the suicide rates for males continues to be higher than those for females, the report notes that the gender gap is narrowing. Among females, the rate of increase was 45 percent, compared to 16 percent for males.

The CDC report didn’t address why suicides are up, but several studies offer clues about possible reasons among the middle-aged, including a study published in 2015 in the American Journal of Preventive Medicine that found that “job, financial, and legal problems” are most common in adults aged 40-64 who had committed suicide, and a 2011 CDC study which found that suicide rates increased during periods of economic recession and declined during economic growth among people aged 25-64 years. 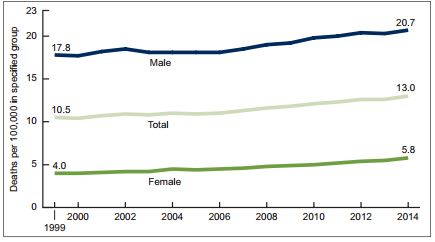 Suicide is the 10th leading cause of death in the nation and the state, and with nearly 700 Kentuckians dying by suicide annually, Kentucky is one of the top 20 states for it.

“The myth is that suicide is an inner-city, urban problem, but the reality is that it is not,” Melinda Moore, a licensed psychologist and assistant professor at Eastern Kentucky University, said in a telephone interview.

Moore, also the chair of the Kentucky Suicide Prevention Group, attributed some of the increase in suicide rates in rural Kentucky to its “gun culture.”

“We have a culture that is very familiar with guns and that familiarity, unfortunately, can really lead to people using very lethal means when they are suicidal,” she said.

And when you add gun culture to economic distress, which is common in much of rural Kentucky, it can be a “cocktail for disaster” for those who are suicidal, she said.

Julie Cerel, psychologist and associate professor in the University of Kentucky College of Social Work, attributed the increase in rural suicides to several things, including the gun culture, lack of access to mental-healthcare and the stigma that surrounds mental-health issues that deters people from seeking help.

Cerel, also president-elect of the American Association of Suicidology, said one reason for the national increase in suicides could be that coroners have become better trained on how to report them. She said that is very important, because people who were close to a person who died by suicide need to know so that they can seek their own mental-health support.

Cerel said 47 percent of Kentuckians knew someone who died by suicide, “and people who are exposed to suicide, especially if it is someone close to them, are more likely to have their own depression and anxiety and thoughts of suicide.”

– Posted by Melissa Patrick in Kentucky Health News, an independent news service of the Institute for Rural Journalism and Community Issues, based in the School of Journalism and Telecommunications at the University of Kentucky, with support from the Foundation for a Healthy Kentucky.