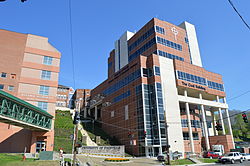 The Kentucky College of Optometry, part of the University of Pikeville, has received preliminary accreditation, allowing it to recruit students for its first class next fall.
The Accreditation Council on Optometric Education notified the university of the approval. ACOE will review the school annually during its first three academic years, and a request for full accreditation will be made by the university not less than 12 months prior to graduation of the program’s first class.
The college will be the 22nd in the nation and will admit 60 students per class, for a four-year total of 240.
Central Appalachia has the highest incidences of severe vision loss from other factors such as diabetes and hypertension and Owsley County leads the nation with more than 18 percent.  UPike, as the university calls itself, also has a college of osteopathic medicine and a school of nursing.