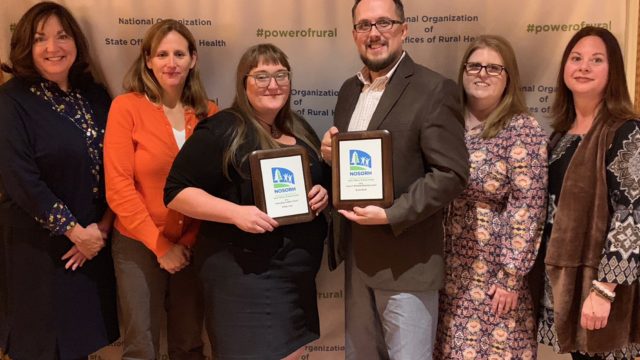 “It’s an honor to be recognized as someone who cares not only about rural health issues, but also about fostering future leaders in the field,” Scott said.

Scott, a lifelong resident of rural Eastern Kentucky, first joined the Kentucky Office of Rural Health (KORH) in 2012 as a rural project manager. He has served as director of the office since 2013.

He serves as an ex-officio member on the Kentucky Rural Health Association’s board of directors and also serves as the chair of the group’s education committee.

At the national level, Scott serves as a regional representative to NOSORH and serves on the organization’s rural health clinic committee, national conference committee and on two workgroups.

“It is a pleasure to congratulate Ernie Scott as the recipient of the James D. Bernstein Mentoring Award,” said Frances Feltner, director of the UK Center of Excellence in Rural Health (UKCERH), which serves as the federally-designated Kentucky Office of Rural Health. “Ernie’s extensive rural health experience enables him to impart valuable knowledge and perspective to emerging leaders. Further, his ability to meaningfully engage with individuals, communities and partners who share a passion for improving rural health has served as an inspiration to many. I cannot think of anyone more deserving of this distinguished award.”

Established in 1991, the KORH is a federal-state partnership authorized by federal legislation. The KORH receives support from the Federal Office of Rural Health Policy. The mission of the KORH is to support the health and well-being of Kentuckians by promoting access to rural health services. The KORH assists clinicians, administrators and consumers in finding ways to improve communications, finances and access to quality health care while ensuring that funding agencies and policymakers are made aware of the needs of rural communities.