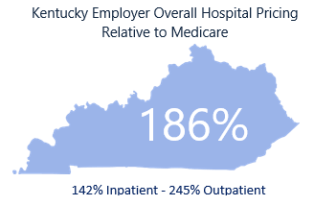 Last month, a new hospital price study by RAND Corporation revealed that depending on which side of the Ohio River they live, individuals with private insurance who receive hospital services pay more to Indiana hospitals than to those in Kentucky. On June 4, the Kentuckiana Health Collaborative (KHC) brought together key healthcare stakeholders to explore the study.

Gloria Sachdev, PharmD, president and CEO of the Employers’ Forum of Indiana and leader of the study, explained that employers in her coalition told her that hospital pricing, which accounts for one-third of healthcare spending in the U.S., was higher in Indiana than other locations in the U.S. She set out to find answers to their questions and partnered with RAND for a study to look at Indiana commercial hospital pricing relative to Medicare pricing.

The results were startling, with outpatient pricing at 358 percent of Medicare prices for the same services. Indiana hospitals claimed that their pricing was normal for commercial insurance rates, so a second study was conducted comparing pricing nationally.

The National Hospital Price Transparency Report, released in June, showed that Indiana’s hospital pricing was not normal as the hospitals claimed. The results of the 25 states that participated showed that on average, employers pay 241 percent of what Medicare would pay nationally. Indiana topped the nation at 311 percent of Medicare pricing. The study nationally showed prices rising and wide variation in pricing with some hospitals charging private insurance 500 percent of what Medicare would have paid.

Stephanie Clouser, the KHC data scientist, presented Kentucky’s results which looked favorably for pricing. Kentucky ranked fourth lowest of the states in the study, with an overall hospital price of 186 percent of Medicare pricing.

In addition to below-average hospital pricing, Kentucky’s prices moved sharply downward over the three years of the study. However, Kentucky’s results showed wide variation between outpatient and inpatient pricing at 245 percent and 142 percent, respectively.

Both Kentuckiana (including Southern Indiana) and Kentucky had among the worst hospital quality and safety ratings of all the regions and states in the study. Clouser explained the goal is for employers to find the hospitals in Kentucky with high value, meaning they have both high quality and best pricing. One of the big questions that came out of this study was to determine what is reasonable pricing for commercial insurance to pay above Medicare, and this answer will determine which hospitals are considered “high value.” For now, no Kentucky hospitals would be considered “high value” using Kentucky’s overall relative pricing of 186 percent, but there is one hospital that would be considered “high value” using the national average of 241 percent (see graph below).

When comparing Kentucky hospital’s overall relative price to Medicare to their CMS quality ratings, there is wide variation in both among Kentucky’s facilities. Just one Kentucky hospital has below-national-average prices and excellent quality.

How are employers responding to this data? Christan Royer, MEd, director of Benefits, Human Resources at Indiana University (IU) and chairman of the Employers’ Forum of Indiana, told event attendees how her organizations is responding to their increasing healthcare and hospital costs.

Royer explained that employers can no longer keep raising premiums and deductibles or using Health Savings Accounts (HSAs) as they have always done in order to bend the cost curve. Employers will need to explore new levers to solve increasing costs, such as contracting for Medicare plus costs, direct contracting or tiered networking.

Currently, Employers’ Forum of Indiana is convening employers to explore these new ways of addressing unsustainable healthcare costs for employers. In 2018, family premiums for commercial insurance averaged nearly $20,000 per year in the U.S.

These findings turned on the light for many employers who generally operate in the dark around hospital pricing yet are responsible for purchasing healthcare for more than half (55 percent) of all Americans. The study showed wide variation in quality and cost among hospitals and states and illuminated that costs are often not a predictor of the quality and safety of care employees and families receive.