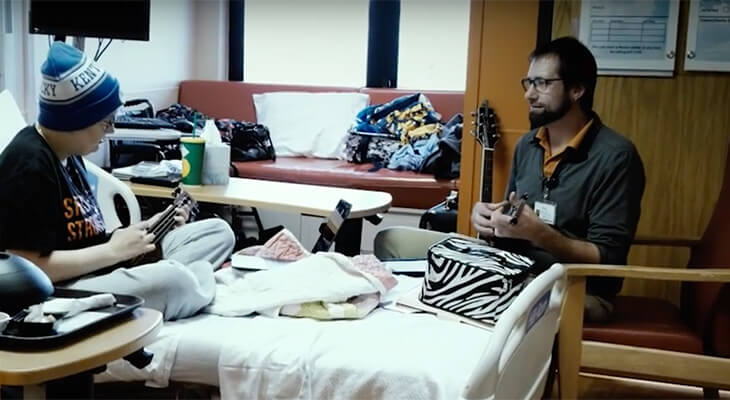 From the studio to the stage, cancer patients at Norton Children’s Hospital are more like musicians-in-the-making.

“The battle that they have done, and they are so resilient,” said Joseph Flynn, DO, the physician-in-chief at Norton Cancer Institute.

Each child has a story to tell and is finding a voice through music.

“The music gives them a new normal and new way of coping,” said Brett Northrup, a music therapist at Norton Children’s Hospital.

They’re doing it through a unique music therapy program called “Cancer Beats,” which was started at Norton Children’s Cancer Institute, affiliated with the University of Louisville.

Formed with support from the Children’s Hospital Foundation and Teen Cancer America, Cancer Beats is taking music therapy to the next level.

The program introduces patients to musical instruments and connects the patients with musicians. It gives patients the opportunity to embark on unique music experiences for artistic expression — experiences like a concert, in which patients took the stage.

“I am strong, stronger than a hurricane and I’ll fight through the pain, ’cause I know I can do it,” 15-year-old Bree Brown sang during Cancer Beats’ first concert.

Brown sang about finding strength in her battle with cancer.

“I just want other people out there who are fighting the same thing as me to know that they are strong, too, and they can do it,” Brown said.

Practicing the ukulele created a diversion from cancer during Bree’s darkest days.

“She fought so hard, so music was a huge outlet,” Bree’s mother, Jenni Brown, said.

Brown passed away three weeks after her performance, but her voice and inspirational story of strength live on through a song called “Victory Dance,” which was recorded in a studio and played on the radio.

“It’s not about overcoming cancer, surviving cancer, it is not about being cancer-free — it is about the victory of just going through the hardship of the day,” said Brian Schreck, a music therapist at Norton Cancer Institute.

The song is a remix of rock band My Morning Jacket’s “Victory Dance,” written by the band’s vocalist and guitarist, Jim James. James, who is passionate about music therapy, gave Norton Children’s Cancer Institute permission to remix its own version of “Victory Dance” as a theme song for the Cancer Beats music therapy program.

– Erica Coghill is with Norton Healthcare in Louisville, Ky.