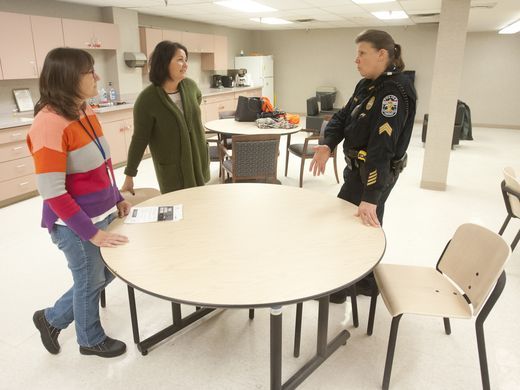 The Living Room is a low key, compassionate, non-intrusive alternative location open 24 hours a day, seven days a week, and is located in downtown Louisville.

The idea was created and launched by CLOUT (Citizens of Louisville Organized and United Together). CLOUT, a faith-based group, coordinated the first “Safe City Round Table” last year, with the goal of finding solutions to community problems, specifically related to mental health and addiction issues.

Peer support staff (persons with lived experience who have a mental illness or substance use disorder) welcome Living Room guests when they arrive, and during their visit, encourage them to connect to resources.

By diverting people in crisis from higher levels of care while providing connections to treatment programs, the Living Room aims to build a healthier community, while easing demand on police officers.

The Living Room is currently accepting guests by police escort only from all nine LMPD divisions, and additional small city police departments such as J-Town and St. Matthews.

Louisville Metro Police often find themselves on the front lines with people who are in need of what the Living Room can offer, said Police Chief Steve Conrad. “This partnership creates a much-needed resource for our community,” Conrad said. “Not everyone needs a jail cell or hospital bed and this will provide an opportunity to get clients the resources they need.”

“What we hope to do is create a pathway from the jail to the Living Room for those who still end up in the local jail system that have mental health issues,” Bolton said.

Tony Zipple, Centerstone Kentucky’s president and CEO, says, “The Living Room is an innovative and compassionate response for our community. This new program, connects those in need to critical community resources, allowing up to 90 percent of people in crisis to be diverted from jail, ER departments or inpatient hospitalizations. It’s not very often that you have the opportunity to save money, improve public safety and do good work all at the same time.”