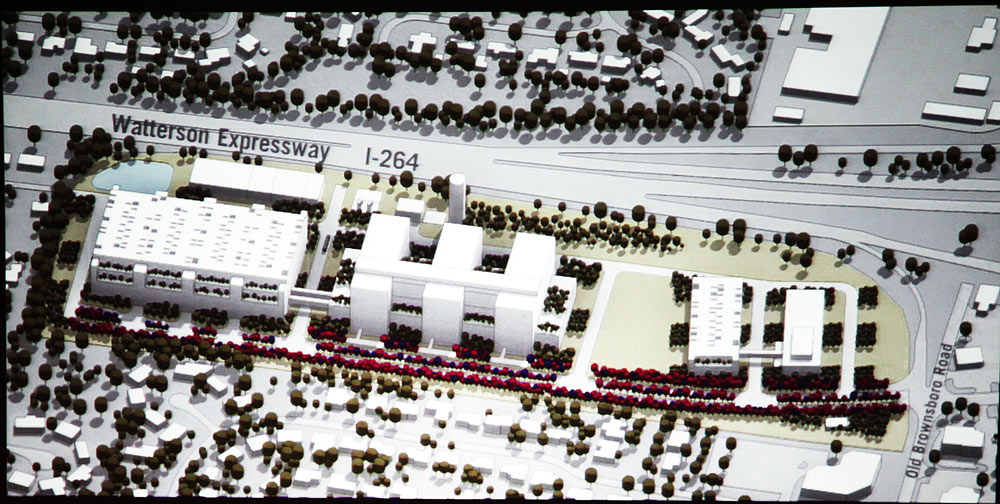 The battle over a new Veterans Administration Hospital may seem over, but one group of concerned citizens and doctors are hoping that’s not the case.

For several years, the VA has proposed building a new hospital in Louisville and has bought a piece of land, called the Midlands, off Brownsboro Road to locate the new medical center. But with a roughly $900 million price tag and at least four years before its proposed opening, members of Grow Smart Louisville, a nonprofit organization promoting smart growth in Louisville, are hoping the Midlands project is scrapped.

Laura Schafsnitz, public affairs officer at VA explained the timeline, “In the fiscal year 2013 budget, VA provided an estimate for this project of $900 million. Design is currently underway and the project budget will continue to be refined until VA submits a request for construction funding at which point it will be based upon at least 35 percent design completion.”

Why Midlands?
The big question many ask is why Midlands was chosen in the first place. Schafsnitz explained the decision, “VA performed an extensive site search during which it evaluated a large number of sites. A site selection board scored those sites against objective criteria that evaluated site conditions, location, accessibility, nearby amenities, infrastructure and environmental concerns.”

Their analysis and due diligence was thorough. Schafsnitz said that VA thoroughly analyzed five site options for the replacement VA Medical Center to determine which site option and resulting project would provide the best care to veterans as well as evaluating the total project cost and time to delivery. During the evaluation period, VA conducted significant due diligence activities on all site options and held several public meetings to gather input from the community and veterans.

Moving downtown was not even the second choice. Schafsnitz said, “The Secretary was presented with the evaluation information and agency recommendations when making his 2011 decision that the Midlands would be VA’s top preferred site and the St. Joe’s site would be VA’s second preferred site.”

Grow Smart Louisville is not convinced. While there are many reasons why various groups oppose a new VA hospital off Brownsboro Road, including the price tag the VA paid for the property and significant road issues, Grow Smart Louisville’s primary concern is veteran’s care,” Eric Gunderson, president, said. “We have these people who served their country and we’re now impacting the care they receive for no reason,” he said.

Better Access to Care
Grow Smart Louisville would rather see the hospital built downtown, Gunderson said, if there’s even a need for a new hospital in Louisville. The reason for a downtown hospital location is better access to care for the veterans who use the hospital. “Everything they need is downtown,” Sharron Hilbrecht, the wife of a veteran and a member of Grow Smart, said. “If anything happens, they’re going to be transported downtown anyway.”

The group points out that other hospitals and specialty medical centers are located downtown, so if a veteran has a heart or lung issue, they are likely to be transported to the Rudd Heart and Lung center at Jewish Hospital. A downtown hospital would mean mere minutes for transportation, while a Midlands location could be 20 minutes or more, especially if traffic is backed up, Hilbrecht said.

“My husband is a vet and he brought that up,” Hilbrecht said of the distance from the Midlands site to downtown hospitals. “He said ‘if something happens, I could die on the way to the hospital.’ And you could. What if you get stuck in traffic on Rudy Lane or in Spaghetti Junction?”

The group also notes that most VA hospital staff are medical students on internships or rotations. The current Zorn Avenue hospital is just a few miles away from the University of Louisville’s downtown medical campus. A Midlands hospital is almost 10 miles away, creating a longer commute for students who work split shifts at the VA, they said. Most VA hospitals are located in metro areas or next to university medical centers for that very reason, Gunderson said.

Another concern with the hospital plans is the shrinking of the new medical center from 200 beds currently to 110 at the Midlands. Dr. Harold Blevins, a member of Grow Smart, said the VA thinks they can move to more outpatient care by the time the new hospital opens, but said that model of more outpatient care “doesn’t work.”

Blevins also said the VA plans to shut down their satellite clinics across the county, forcing veterans who use the clinics and not the hospital to commute to the medical center instead, once the new hospital opens. “They want to shut down Shively, Newburg, DuPont clinics and put everything at the Midlands,” he said.

Grow Smart Not Alone
Grow Smart Louisville isn’t the only entity that opposes a new VA hospital off the Watterson Expressway. The Kentucky Medical Association (KMA), at the leading of the Greater Louisville Medical Society, passed a resolution at their annual meeting in September opposing the Midlands hospital location. KMA President Fred Williams said his entity, which is the foremost medical association in Kentucky, supports a downtown location instead. “It really has nothing to do with the purchase of the property that has received a lot of press recently,” Williams said. “It’s quality of care issues. Patients at the VA hospital are often transported between facilities.”

Williams said the Midlands location is too far away from important medical centers, risking the life of a veteran. “It will take these patient transfers and make them longer,” Williams said. “And that could threaten the health of a veteran.”

In addition to their stated opposition to the proposed location, the KMA also sent a letter of their stance to VA officials, Williams said. They haven’t received a response from the VA, he said.

Holding on to Hope
But those opposing a Midlands location said there is still hope, despite the purchasing of land and apparent plans to move forward. Blevins said at the last public meeting, held weeks ago, VA officials had presented a second option they hadn’t previously mentioned: staying at the current hospital at Zorn Avenue and renovating.

“So that means someone is subtly re-thinking this,” Blevins said. “They haven’t said that for two to three years, so that’s a big statement.” However, when asked about this, Schafsnitz replied, “During the 2009 feasibility study for the project, VA determined not to reuse the existing Zorn facility.”

With a high price tag of construction, years away from opening the doors, more and more people are waking up to the realization a new hospital, if necessary, shouldn’t be placed at the Midlands, Gunderson said. And with time on their side, groups like Grow Smart Louisville and the KMA plan to continue to oppose a hospital on the Midlands site. “There’s hardly anyone we talk to that doesn’t think this is a bad idea,” Gunderson said. “And I think those who won’t support a downtown location have been misguided.”

For those that agree with Gunderson, there is still a chance to voice concerns. According to Schafsnitz, the public can still give input on the proposed plans. However, this involves only an opportunity to comment on the analysis associated with completion of a site specific Environmental Assessment. Schafsnitz explained, “The analysis is expected to be completed in the next few months with draft report expected in July. It will be made available for public comment. At that time, the VA will hold another public meeting to present the analysis and solicit input from potentially interested parties. That meeting will be followed by another public comment period after which the VA’s consultant will prepare a final report and recommendation which will include responses to comments received on the draft report.”