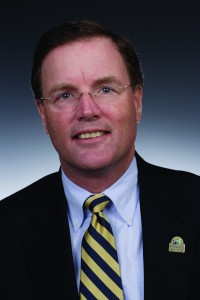 The American College of Health Care Administrators (ACHCA) is proud to announce Dr. Keith R. Knapp, President and Chief Executive Officer of Christian Care Communities, as the 2012 recipient of the Distinguished Service to ACHCA Award. The award was presented during the recent awards banquet at ACHCA’s Annual Convocation and Exposition in Nashville, Tennessee.

Dr. Knapp has served the ACHCA since 1982 in a number of different capacities. He is a past National President and has continued to serve in many roles, including serving on the Academy Board of Trustees, Convocation Committee, and Mentoring Task Force. He has also served several terms on the Kentucky Nursing Home Administrators Licensure Board, and successfully spearheaded the effort to include ACHCA Certification in the state’s regulations as an accepted qualification for gaining reciprocity. His knowledge, experience, energy, and enthusiasm are an inspiration and have been invaluable to both the national ACHCA and the Kentucky Chapter.