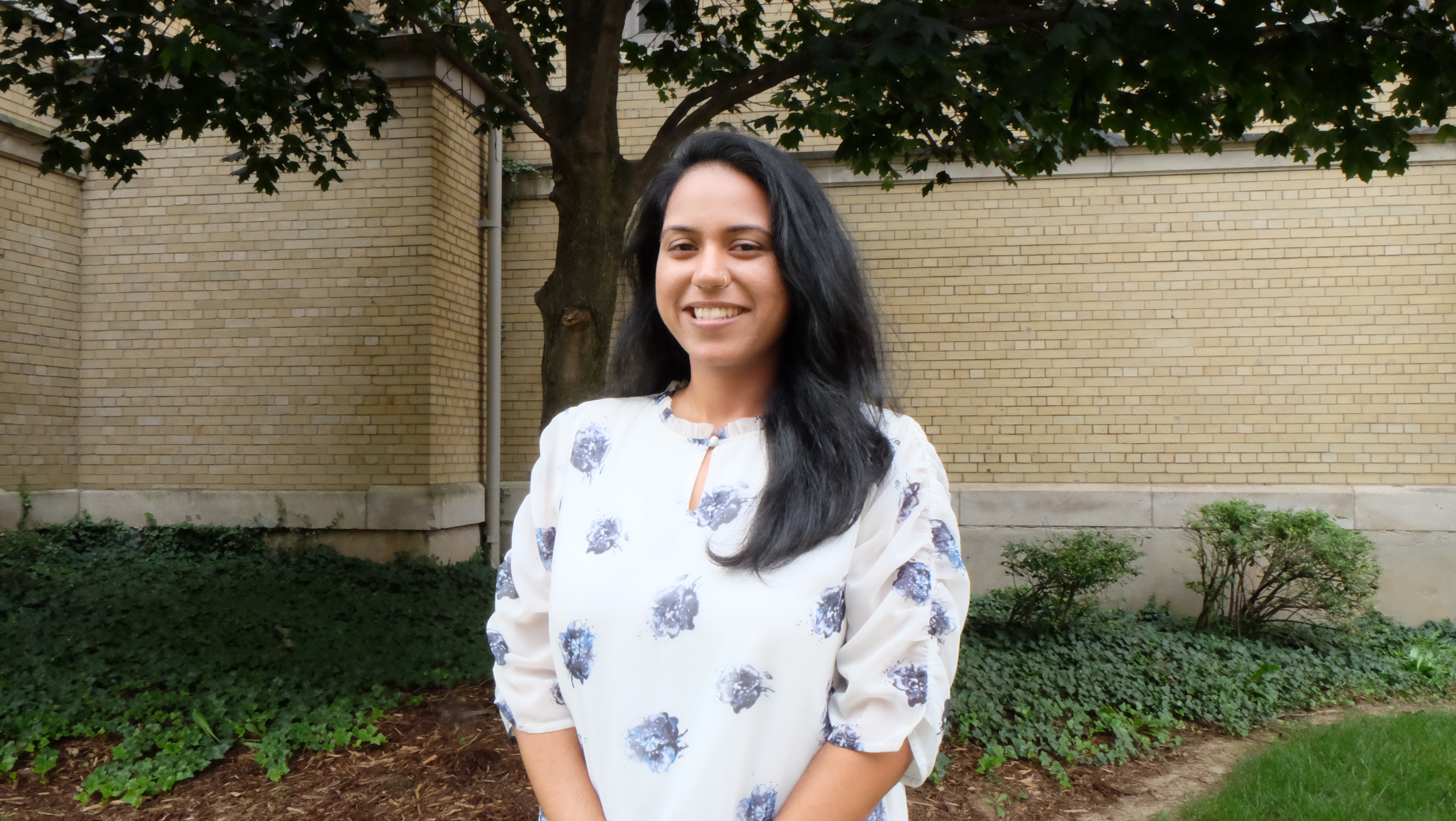 The Health and Social Justice Scholars Program at the University of Louisville provides an opportunity to educate professional and doctoral students in an interprofessional manner to produce high quality scholarly activities related to health equity, health and healthcare disparities, social justice and healthcare innovation with the goal of benefiting underserved and disadvantaged populations.

One scholar from the first cohort (2016), Mallika Sabharwal, a fourth-year medical student, has completed her project on social justice and medical mistrust.

Sabharwal’s project details research conducted in the Smoketown neighborhood of Louisville, Ky., an area with high rates of poverty, diabetes and heart disease.

To address these health issues, a program is being implemented to provide free heart health assessment clinics in Smoketown, led by UofL School of Medicine in partnership with additional schools at UofL and community-based organizations. This project, summarized by Josh Miller, CEO and co-founder of IDEAS xLab, and Sabharwal, is called “Heart of a Champion.”

Engaging both community members and healthcare providers in and around Smoketown, findings reiterated the importance of patient-provider communication to build trust. And, at the same time, both groups acknowledged (with varying experiences) the barriers placed on these relationships at the systems level (healthcare organization, insurance, etc.).

Sabharwal, a fourth-year medical student and Health and Social Justice Scholar, has been working with IDEAS xLab–a nonprofit focused on leveraging the power of arts, culture and the creative industries to support health and well-being innovation–to complete a community-based participatory research project that examines the role of medical mistrust in the Smoketown neighborhood. The approach, including the utilization of six-word memoirs–an arts-based storytelling tool–has informed multiple initiatives over the past two years.

A community-based participatory research project is a collaborative approach to scientific research where community members have input into the research process, including decision-making, data-gathering and evaluation.

Before researchers dive into the methods of a project, they become familiar with the community by an informal walking survey, going door-to-door or attending community events in order to engage residents and stakeholders as part of the process.

Despite the geographic proximity to healthcare services, it is important to understand other factors that impact accessibility. Besides environmental and socioeconomic factors, psychosocial behaviors also play an important role.

Trust and confidence in a medical provider and healthcare organization is important. Medical mistrust stems from historic events and institutional racism that perpetuate discrimination in society, causing the disbelief of individuals in a homogeneous healthcare system and its providers.

This contributes to health inequities and underutilization of healthcare. Medical mistrust is also associated with poor communication in the patient-provider relationship. (See sidebar “Racial Inequalities in Healthcare”)

Just as Sabharwal was embarking on the project, IDEAS xLab held the One Poem at a Time poetry walk, led by Hannah Drake, where local spoken-word artists performed prose honoring landmarks and known businesses. The poetry walk featured a new series of billboards co-created with community members and designed to engage stakeholders in a policy discussion around concentrated outdoor advertising and its impact on health.

To understand how Smoketown residents interact with the healthcare system and the impact of medical mistrust, Sabharwal administered the Medical Mistrust Index (MMI) to Smoketown residents and local healthcare providers. Twenty-six community members and 80 providers completed the MMI survey. There were significant differences between community members and providers for 11 of the 17 MMI survey items.

Based on survey results, focus groups and interviews were conducted to gather qualitative data in the form of six-word memoirs, or six-word phrases that encompass a narrative and draws a big idea into a six-word description that serves as a catalyst for creativity.

Early findings were discussed and shared with participants at a community event to further validate the results, and through a poster presentation at Research!Louisville, designed with support from Theo Edmonds, co-founder of IDEAS xLab and assistant professor in the UofL School of Public Health and Information Sciences.

Heart of a Champion

To expand access to healthcare and services while addressing medical mistrust, “Heart of a Champion” is a partnership between the UofL schools of Medicine, Nursing, and Public Health and Information Sciences; the Have a Heart Clinic; UofL Physicians; the UofL Envirome Institute; Surgery on Sunday; the American Heart Association; UofL’s Get Healthy Now; UofL’s Center for Creative Placehealing; IDEAS xLab; Dare to Care; YouthBuild; Smoketown Family Wellness Center; and several Smoketown-area churches who are offering free heart health weekend clinics starting in February 2019.

“With February being American Heart Month, it’s the perfect time to kick off these screenings,” said Erica Sutton, MD, a general surgeon with UofL Physicians and associate professor at the UofL School of Medicine who will lead the UofL doctors staffing the clinics. “This is a model for community-engaged care, where we work with partners in the community who are taking care of a population we want to reach. It’s important for us not just to open our office doors to people, but really provide a presence for health and access to care by going out into the community.”

The initiative, Heart of a Champion, will screen residents for cardiovascular disease and educate them on lifestyle interventions to lower their risk. If additional tests are needed they will be referred to a specialist at no additional cost. Six-word memoirs will continue to be used to collect qualitative data and to measure residents’ and providers’ perceptions of trust specific to the healthcare sector.

Marginalized populations have endured generations of exclusionary practices and policies that have stripped their agency in medical situations. In order to fundamentally change this dynamic, the healthcare system needs to build trust with the community. This requires space and time—the space to connect with people and the time for the connection to materialize. Only then will people be given a seat at the table, feel accepted and have the agency to improve their health.

A new book, “Just Medicine: A Cure for Racial Inequality in American Healthcare” by Dayna Bowen Matthew (NYU Press), outlines ways implicit bias exacerbates racial disparities in health. Even though we have been studying health inequality for more than 30 years, rates are still increasing for deaths related to health disparities.

According to Matthew, most implicit bias is unintentional. Here are three examples:

Example 1: A physician may decide not to offer aggressive cancer treatment to minority patients based upon past-experience with other minority patients who didn’t have enough resources, family support and work flexibility to allow them to adhere to the difficult and time-consuming medical follow-up required.

Example 2: A physician presumes a minority patient’s level of knowledge and automatically explains terms he/she assumes the patient may not understand.

Example 3: A physician may set a different conversational pace and tone while with minority patients, interrupting more or making less eye contact. The amount of shared decision making may decrease, and less time is spent with a minority patient.

This creates a vicious cycle where the minority patient unintentionally reacts to the physician’s discrimination, become offended and disengages and won’t follow up with treatment.

Even though it may be unintentional, it causes huge problems. That’s why author believes that implicit bias should be illegal, just as overt discrimination is. Matthew said, “We need to enact strong, evidence-based legal remedies that accurately address implicit and unintentional forms of discrimination.”

According to Matthew, “an anti-implicit bias discrimination law would first signal a societal commitment to equality and justice in healthcare.”