What do cancer, chronic pain, arthritis, migraines, epilepsy, anxiety and sleep issues have in common? All have been included in the discussion of hemp-derived cannabidiol (CBD) as a natural treatment for these and other conditions.

This shouldn’t come as a surprise, given that the CBD industry is projected to be a billion-dollar industry in the next three to five years, according to an article in Forbes. In her article, Debra Borchardt reports that hemp-derived CBD hit $170 million in 2016, and is expected to see a compound annual growth rate of 55 percent over the next five years.

CBD is one of many cannabinoids found naturally in both marijuana and hemp plants. As more is learned, the medicinal benefits of CBD are very encouraging, with many CBD users seeing excellent results.

Until now, much of the CBD usage has been through the use of marijuana, however, marijuana’s dominant cannabinoid, tetrahydrocannabinol (THC), causes a “high.” The appeal of industrial hempderived CBD is it provides all of the medicinal value of marijuana, except with no psychoactive reaction, as there are only traces of THC found in hemp. 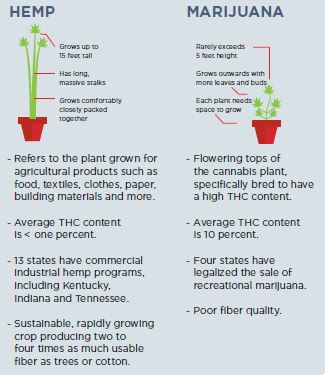 How Hemp Works
The science behind cannabinoids, including CBD, is that they attach themselves to certain receptors in the body to produce their effects. The human body has two receptors for cannabinoids: CB1 and CB2.

CB1 receptors deal with coordination and movement, pain, emotions and mood, thinking, appetite and memories, while CB2 receptors are common in the immune system and have an effect on inflammation and pain. Rather than acting on each receptor, it appears that CBD seems to influence the body to use more of its own cannabinoids.

The appeal of industrial hemp-derived  CBD is it provides all of the medicinal value of marijuana, except with no psychoactive reaction, as there are only traces of THC found in hemp.

In contrast,  the cannabinoid analgesia is neither correlated with their binding affinity for CB1 and CB2 receptors nor with their psychoactive side effects.”

Hemp in Kentucky
Increased research continues to quantify the benefits of CBD which will in turn lead to more consumer interest and use. The Midwest region, especially Kentucky, will benefit immensely from this growth. Certain states are already clarifying the legislation around hemp derived CBD as a legal treatment option.

With the clear state legislation favoring hemp-derived CBD, and having the optimal growing conditions to cultivate hemp, Kentucky is rapidly becoming the “Silicon Valley” of the hemp industry.

This fear stymies consumer efforts to find pain relief from a natural alternative, and also thwarts what could be a booming new industry for Kentucky.

— Jeff Amrein is CEO of Extract Wellness in Louisville, Kentucky.